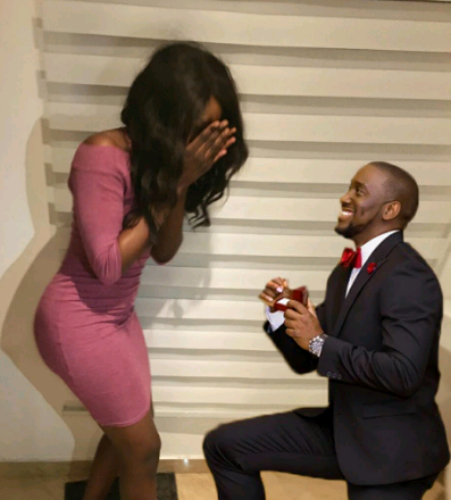 Going to men’s houses wasn’t Talia’s thing especially given the risk of what may transpire. She however felt safe in the presence of Dennis and her gut instincts were not elated in any way. She had never been to Dennis’s place so she wondered why he was so eager for her to go there. All they had done for the last three years is meet up for mostly breakfast as they chat about what had been going on in each of their lives. Their friendship had grown so much over the years. Nothing had ever transpired between them physically but unknown to both of them, they always hoped it would.

Something she had kept from Dennis is that she was harboring the fact that she was smitten by him. His drive, zeal and ambition to do better just made her admire him even more. Also, he was very family oriented and always checked up on his siblings and parents. This was a trait she just loved and adored him for. She had thought of coming clean to him but she feared that he would think that this was like a strings attached kind of thing after she had promised not to ask anything from him after giving him the money.  She had tried for months to push the thoughts of her and Dennis far away but she couldn’t. She wondered if Dennis felt the same way about her. He had told her about his past and she was not so sure if he would ever even consider dating again let alone get into any form of relationship with any woman. His exes had chewed at his humanity and Talia could tell Dennis was barely holding on when it came to trusting a woman.

Truth be told, when she had decided to help Dennis, she only did it because she thought he could actually make it in life and that he was determined to get there through hard work. She could see in his eyes the fire of a man who just lacked the opportunity that some of his peers had gotten. Her intention had no motive behind it. The more she got to know him, the more she was attracted to him. The car hit a pot hole which brought Talia’s mind back to the present circumstances. There was an atmosphere of awkward silence as Dennis was quiet all through and also seemed a bit nervous. This made Talia nervous to.

They came to a standstill after like an hour or so drive. Talia was not really sure. The gate man opened the door to some very pretty flats in Kitengela. Talia had never been here so she was quite amazed. At this point Dennis even seemed more nervous than before. He got out and opened the car door for Talia as he directed her towards his house. He lived on the third floor so they had an uncomfortable walk as they climbed the stairs. He opened his door and welcomed her into his house. He asked if she wanted anything but she said that she was cool and didn’t need anything. Dennis was basically shaking and taking some really deep breathes at this moment. Talia held his hand gently and asked if he was okay. He reassured her that he was fine and just needed a minute to gather his thoughts and tell her what he really wanted and desires.

His eyes could not lie, he was captivated by this beautiful, intelligent, kind, caring, considerate and loving lady sitting right in front of him. He has never felt this way about any other woman and his biggest fear was that if he expressed his feelings to her and she rejects him then he may not only lose her friendship but her in general forever. He already felt guilty for all the sexual thoughts he had had about her and also masturbated to. The guilt was mostly because she had been so good to him and all he could think of was ripping clothes from her body. He knew he wanted her sexually but he also wanted everything else that came with that. He wanted her support, her love, her loyalty, her advice, her optimism, her admiration…. just everything about her. He knew that once he walked down this road he could never go back. So many instances he had fought the urge to kiss her whenever she hugged him and he couldn’t live with this anymore. If life had taught him anything, it is that you have to go for what you want and more importantly “chelewachelewa utampata mwana sio wako.” This is a Swahili phrase normally used to indicate that if you wait too long before acting on something, you may lose out on it completely.

Dennis had never wanted anything so bad. He could barely utter meaningful words let alone sentences.

He looked straight into Talia’s black captivating eyes and said, “I know this may come as a shock to you but I do hope that after I say what I want you will not change your perception of me. You are the most beautiful woman I’ve ever laid my eyes on. I can barely focus when I’m around you. Our friendship means the world to me more than words can express. I’ve only known you for three years but you brought light into my life that I can barely dim. I am crazy and madly in love with you and I want to be more than your friend. I want you. I want to love you, to be your provider, your protector and most importantly to show to the world and hopefully our son or daughter someday how a man should love a woman. I want to love you properly to see you blossom into the vision of you. I don’t just want to be your friend I want to be much more. I want to be an example for our future children on how a man should act and how he takes care of his home and family. I want to be your peace, your solace, your muse when the times get rough. I want you and just you. I may not be able to buy you everything that you may want, need or desire because I am not a very wealthy man but I do promise to move heaven and earth and give you the best that I can. I cannot promise that I will never make you cry but I do promise to be there for you through it all.  I know that I am not perfect but as long as we are together I will keep trying. “

Talia was shedding tears as he said all this. Dennis looked right at her teary eyes and with a hopeful aura, he went down on one knee and pulled out a beautiful golden ring with some diamond flakes. He continued, “Will you Talia Wellington do me the honor of becoming my wife?” Dennis at this point was also struggling to contain his tears. Opening up about his feelings towards Talia had brought back memories he had hidden for a while.

His hand was still trembling when he heard Talia blurt out a “YES I WILL MARRY YOU AND BECOME YOUR WIFE!” Dennis just burst out into tears of joy. He stood up and gave Talia a comforting and long embrace. He was so happy that he could barely think straight. He looked at Talia lovingly and asked if he could kiss her and she shyly responded “YES.” He had yearned for so long just to taste the sweetness of her lips and his thoughts were confirmed because her lips tasted like chocolate. He could make out with her for the whole day. His biggest fear had not come true and he could finally relax. He could not wait to tell his siblings, friends and parents about the good news.

2 Replies to “MY GUARDIAN ANGEL PART 2”